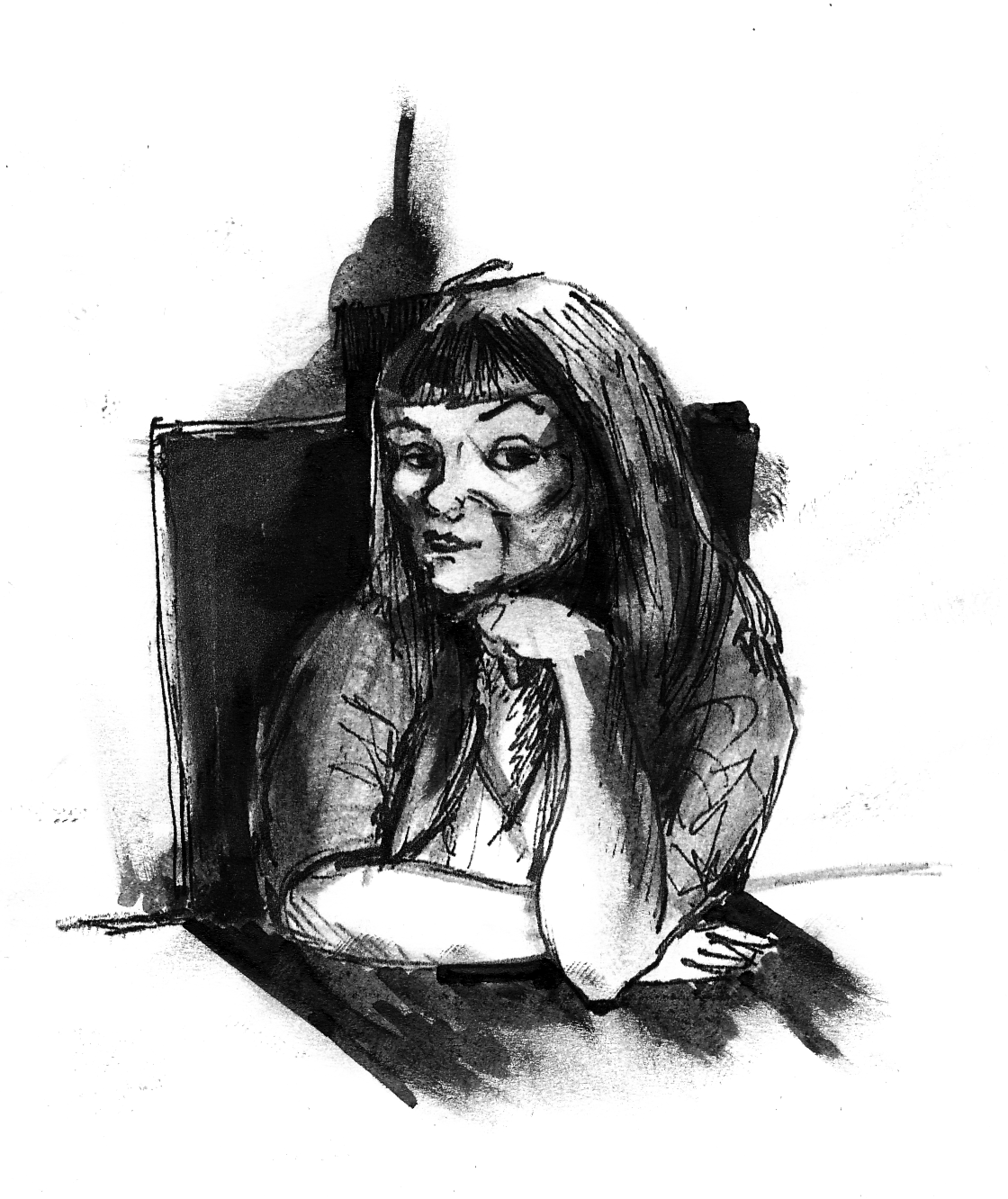 I’m Kasia Gawlak (aka @confessionality on Twitter). I was born in the UK and immigrated to Canada with my family in 1980 at the age of 2. I grew up in Cardiff Echoes, Alberta (near Morinville), and then St. Albert, where I attended Paul Kane High School. I was very active in the school’s Drama Club and played the clarinet in the high school band.

As a child, I loved and excelled in English and Language Arts. I was an avid reader, with frequent family trips to the Morinville and then the St. Albert public libraries. I was writing poems, stories and plays from a very young age. Most of my early poems followed a pattern of rhyming quatrain in iambic pentameter and I believe I rhymed “life” and “strife” a few times *shudder*. They usually centred around my unrequited love of first boy who ever broke my heart.

In high school, I discovered female singer/songwriters like Tori Amos, Aimee Mann, Jann Arden and Sarah McLachlan, who were writing personal and vulnerable stories in their songs that seemed to speak to my experience, or at least speak to a way of dealing with them that made sense to me. I felt at home in poetry, exploring the complexities of adolescence in a less literal and more abstract way. And what are great song lyrics if not great poetry? These women gave me direction and inspiration in my own writing, and looking back at my progression during that time, I began to mature both in idea and in execution.

In the summer before my first year of University, I wrote and directed a profoundly depressing play for Freshfest, a St. Albert teen theatre festival, called Tiger Lilies, about tortured love between two teens living in a group home. The following year, I participated in Freshfest again, this time writing a vignette comedy called Crackers, inspired by true stories of chance encounters with kooky people in public places.

I entered University of Alberta in the fall of 1995 as a first-year English major. After excelling academically all my life, it seemed like a given that I would attend University of Alberta while living at home with my parents to keep costs down and go into English, my best subject in school. Like many naive young 18-year-olds, I figured that was the best route to becoming a famous writer.

Campus life also brought with it my first access to the Internet, and I fell down that rabbit hole in a big way. It started with BBS and Ew-Too talkers, text-based chat rooms that were early precursors to the social media networks of today. I fell in love with geek culture and the Internet, but I also struggled academically. For the first time in my life, I had to work hard to keep up and given the amount of time I was spending online, it wasn’t long before I fell behind. Despite being on academic probation, in my second year I applied and was accepted to the WRIT 294 poetry workshop, one of U of A’s few creative writing classes. I finally hit my academic stride, and was able to find more balance between my newfound interest in the Internet/website development and my studies.

In my fourth year at U of A, I applied and was accepted to the WRIT 394 poetry workshop with Edmonton poet Bert Almon as my instructor. It was a small session, with only ten or eleven students in the course, and in addition to critique and analysis of our own free verse and free form writing, we explored writing in different classic poetic forms. I grew close with several other students in this workshop, and that summer a group of us from the class formed a short-lived writing collective called “Paper Prostitutes Inc.” We performed our work live on the street and sold copies of our poetry rolled into pill bottles and wrapped around condoms during the 1999 Edmonton Fringe Festival. I was also active in events put on by Fait Accomplit, a literary periodical produced by the Comparative Literature Students Association, which published a few of my pieces.

I graduated from U of A with my English Degree in 2000 and started a career in Marketing Communications, mostly as a copywriter in the IT sector. This seemed like a natural fit with my writing bkacground and my newfound interest in technology. At the end of that year, I received my first paid publication credit — one of my poems appeared in the winter issue of Edmonton-based literary magazine Other Voices. Though I continued to write poetry frequently, leaving school and entering the work world meant less obviously available opportunity to be involved with the creative writing scene in Edmonton. Over the next ten years, I continued to pursue my love of website development, launching several projects and gradually improving my skills and knowledge in that field to the point where I felt ready to transition from hobbyist to professional and make it my primary career. In 2007, I accepted a position as the Marketing Coordinator for Website Development for an internationally-distributed industrial manufacturing company, where I stayed until early 2010.

Through 2010 and 2011, I faced some serious personal challenges. I lost my mother to metastatic breast cancer in the summer of 2010. My mother and I were very close, and after watching her go through the ups and downs of treatment for over 2 years, even though I thought I was prepared, my grief over losing her induced the most crippling bout of depression I have dealt with to this point. Depression was not new for me, as I had been through episodes on and off over the years since I was a teenager. Some of the circumstances surrounding my mother’s death resulted in a situation that was both incredibly stressful and extremely painful emotionally, and I felt debilitated. There was a bitterness and anger inside me that was always perched on my shoulder, stashed in my pocket, living in the very centre of my guts. It coloured my perspective on everything. Holding down a regular job was out of the question, because it was a toss up each morning whether or not I would be able to drag myself out of bed, let alone function productively in a working environment.

During this time, I became involved in Edmonton’s growing social media scene, and once again turned to writing — both poetry and my many posts on Twitter and Facebook — to manage and process my grief. While I will admit to a few regrets about some of the things I wrote and exposed publicly during that time, to my own retrospective frustration with my state of mind at the time, there were also many positive things that came out of it. One of them was a new network of friends, some of whom eventually became clients and business contacts when I launched my freelance website development and creative consulting business, CodeWord Media Design, full-time in 2011.

One of the people I met on Twitter was Jason Norman, who was a short-story writer looking for a partner in starting a new creative writing collective and performance series in Edmonton. At the time, he was running an independent literary magazine called Wufniks, and I showed him a rough draft of my poetry collection manuscript. He put one of my pieces in an issue of Wufniks.

We met for coffee one evening in December of 2010, and I told him about my experiences with poetry readings in University. He told me about grad school in the UK and Wufniks. We shared a vision for a safe space for writers, one where people of all experience levels and walks of life working in a variety of creative writing genres could come and share their work and meet new people. We started the Words with Friends Creative Writing Collective (known on Twitter and Facebook as yegwords). We held our first event in June of 2011, and since then have produced over 15 events for writers in the city, including 2 WordCrawl nights, a night of readings in the Edmonton Streetcar atop the High Level Bridge, and a collaborative project between poets and visual artists called Symbiotica for Edmonton Poetry Festival in 2013.

While I wasn’t working, I decided to use some of the funds I received from my mother’s estate to fund the publication of my first poetry collection. It had always been a dream of mine to publish a book of poetry someday, but I knew how unlikely the chances of stumbling into a publishing contract would be. For years, friends of mind who were musicians and songwriters were publishing and selling their own CDs, so I figured, why not do it with a book? I knew I had the print design skills to put it together, and Andreas Loutas and I had been talking about collaborating on illustrations for some time. So I set to work making it happen, and launched the book in October 2011 at a Words with Friends event.

I am grateful for Words with Friends. I have met so many thoroughly talented writers and amazing people as a result. It is responsible for making me active again in Edmonton’s creative writing community, and instilled a new confidence and belief in my own creative voice and will to succeed.

Recently, I have become busier in my professional life. My list of clients is growing in size and scope, and I spend more and more time working from home to see my business thrive. While that translates to less time spent on my personal writing, I am proud of my progress and thankful for the opportunities I’ve been given. In November of 2013, I was asked to sit on the Board of Directors for Edmonton Poetry Festival and fill a spot left vacant by Mary Pinkoski when she was named Edmonton’s Poet Laureate. This was an incredible honour, and I’m still a bit awed by the people who I will be sitting next to in this role — Anna Marie Sewell, Jannie Edwards, and even Don Perkins, who was once one of my professors during my degree. I’m looking very forward to learning the ropes, working with the veterans on the Board to put on this year’s festival, and getting even more involved as a volunteer advocate for poetry in Edmonton. Each Board Member sits on a committee, and I believe I will be sitting on the Festival’s Communications Committee, which should be a nice fit for me.

I have realized recently that creative writing is about more than just passion, or talent, or the ever-elusive “muse”. I have always been my most prolific when in emotional crisis, because for me, poetry is art but it’s also therapy. Continued efforts in writing are also about self-discipline and scheduling, which has never been my strongest suit. That is one of the biggest things I want to work on in 2014, and I am going to try hard to get back into daily blogging, just to flex the muscles. Hopefully that will get my poetry juices flowing again, and I will be more prolific in the months to come.

Regardless of where my professional or creative life takes me from here, I know that I will approach it as I have everything else — by putting it all out there and seeing what happens.